This page is dedicated to Charlotte Cooper; one of the greatest players of the tennis history, who was born 150 years ago. She was an English female tennis player who won five singles titles at the Wimbledon Championships and in 1900 became Olympic champion. In winning in Paris on July 11 1900, she became the first female Olympic tennis champion as well as the first individual female Olympic champion.

Charlotte Cooper was born as the youngest daughter of Henry Cooper, a miller, and his wife Teresa Georgiana Miller. She learned to play tennis at the Ealing Lawn Tennis Club where she was first coached by H. Lawrence and later by Charles Martin and Harold Mahony.

She won her first senior singles title in 1893 at Ilkley. Between 1893 and 1917 she participated in 21 Wimbledon tournaments. At her first appearance she reached the semifinal of the singles event in which she lost to Blanche Bingley Hillyard. She won her first singles title in 1895 defeating Helen Jackson in the final of the All-Comers event, wearing an ankle-length dress in accordance with proper Victorian attire. In that match she was down 0–5 in both sets but managed to win in straight sets. 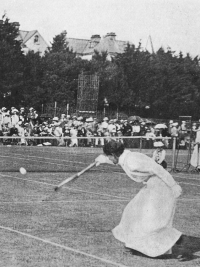 The following year, 1896, she successfully defended her title in the Challenge Round against Alice Simpson Pickering. Between 1897 and 1901 the titles were divided between Cooper Sterry (1898, 1901) and Bingley Hillyard (1897, 1899, 1900). The 1902 Challenge Round match against Muriel Robb was halted on the first day of play due to rainfall at 6–4, 11–13. The match was replayed in its entirety the next day and Robb won 7–5, 6–1, playing a total of 53 games which was then a record for the longest women's singles final. In 1908 as a mother of two she won her last singles title when she defeated Agnes Morton in straight sets in the All-Comers final after a seven year hiatus and at the age of 37 year and 282 days. She is the oldest Wimbledon’s ladies’ singles champion and her record of eight consecutive singles finals stood until 1990 when Martina Navratilova reached her ninth consecutive singles final.
In addition to her singles titles Cooper Sterry also won seven All-England mixed doubles titles; five times with Harold Mahoney (1894–1898) and once with Laurence Doherty (1900) and Xenophon Casdagli (1908). In 1913 she reached the final of the first Wimbledon women's doubles event with Dorothea Douglass, 18 years after winning her first Wimbledon title. 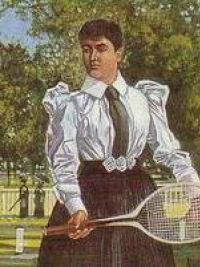 She won the singles title at the Irish Lawn Tennis Championships in 1895 and 1898, a prestigious tournament at the time. At the 1900 Summer Olympics in Paris, France where women participated for the first time, Cooper Sterry won the tennis singles event. On 11 July 1900 she defeated Hélène Prévost in the final in straight sets and became not only the first female Olympic tennis champion but also the first individual female Olympic champion. Together with Reginald Doherty she also won the mixed doubles title after a straight sets victory in the final against Hélène Prévost and Harold Mahoney. In 1901 she won the singles title at the German Championships which were held that year in Bad Homburg and in 1902 she won the Swiss Championship in Ragatz. Cooper Sterry remained active in competitive tennis and continued to play in championship events well into her 50s.. 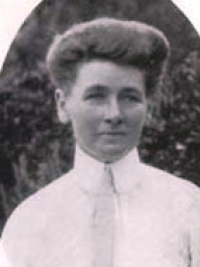 On January 12, 1901 she married Alfred Sterry, a solicitor, who became President of the Lawn Tennis Association. They had two children: Rex (born 1903) who was the Vice-Chairman of the All England Club for a period of 15 years during the 1960s and 1970 and Gwen (born 1905), a tennis player who participated at Wimbledon and played on Britain's Wightman Cup team.
Charlotte Cooper had been deaf since the age of 26.
She died on October 10, 1966 at the age of 96, in Helensburgh, Scotland.
Charlotte was inducted into the International Tennis Hall of Fame in 2013.
Cooper Sterry had an offensive style of playing, attacking the net when the opportunity arose. She was one of a few female players of her time who served overhead. Her main strengths were her steadiness, temperament and tactical ability.Her excellent volleying skills stood out at a time when this was still a rarity in ladies tennis.